Get Ahead by Doing less

Political parties are required to have a good grasp of policy documents  and developments. Additionally, they have to track the activity of political actors on social media . Such extensive policy monitoring can be pricey and time-consuming, especially when more documents are being digitised and made available. Especially around elections, political parties are overburdened with tasks. Quick and easy access to essential information becomes increasingly valuable.

Policy monitoring using  Policy-Insider.AI allows political parties and parliamentary groups to effectively navigate through political institutions and documents  whilst staying up to date with the most recent policy trends. Our platform selects the most relevant policy documents  using an AI model to make your research more effective. Additionally, our social media tracker  will help your party gain a broader overview of emerging political trends .

The most successful political parties rely on extensive information collection to build their capacity. To organise political campaigns or implement future strategies, political parties need to  make data-informed decisions. Our online dashboard allows users to consult  over 400,000 policy documents per year based on region, institution, and policy area  in the language of preference.

Every day, we complete the database with newly published documents to provide  the most up-to-date information. In addition to official documents , such as draft legislation or meeting minutes, you will also be able to find press resales  or political newsletters on our platform.

Our database contains information from a broad range of institutions, such as  federal governments, regulatory authorities , courts, as well as  European and international organisations, such as the OECD and the WHO. The legislative process can be closely followed by looking at national parliaments or ministries.

Moreover, your party will be able to identify political trends  during the agenda-setting stage on a European level by consulting the main institutions, such as the  European Parliament, the Commission and the Council. To provide a complete picture, we include  consultative and regulatory bodies, for example, the European Committee of the Regions or the European Central Bank.

Political parties are highly reliant on effective communication  channels and the ability to expand the outreach. Policy monitoring is thus necessary for spreading clear messages both internally and externally. Moreover, increasing outreach requires political parties to  identify the most relevant political actors. Our platform enables users to  track the activities of politicians and political groups, as well as pinpoint the most active policymakers within specific policy areas.

Policy-Insider.AI allows political parties to not only immediately identify the most influential politicians, but also  explore their political profile , including their political connections and contact information . You will be able to find out what other Members of Parliament have been working on. This can be used to improve coordination internally  but also implementing a targeted approach for external communication .

Find out how you can benefit from using Policy-Insider.AI

Thanks to our platform, you will minimise the time and effort  required to stay updated on the most recent policy developments. With Policy-Insider.AI, you have all relevant documents  from the most important institutions in one place within a few clicks. The option to browse through different institutions or subject areas is vital for parliamentary groups, which need a comprehensive understanding of a broad range of policy developments.

We also offer daily personalised email alerts  so that everyone in your organisation can get the most relevant information and kickstart a productive workday. What makes Policy-Insider.AI particularly valuable to political parties is the analysis of political activity on social media. You can make use of Policy-Insider.AI’s social media analysis tool  to identify new policy signals and  expand your network. To read more about how we use Twitter to analyse trends in the activity of policymakers on social media,  click here.

What is the Presidency of the EU Council? The European […]
Read more 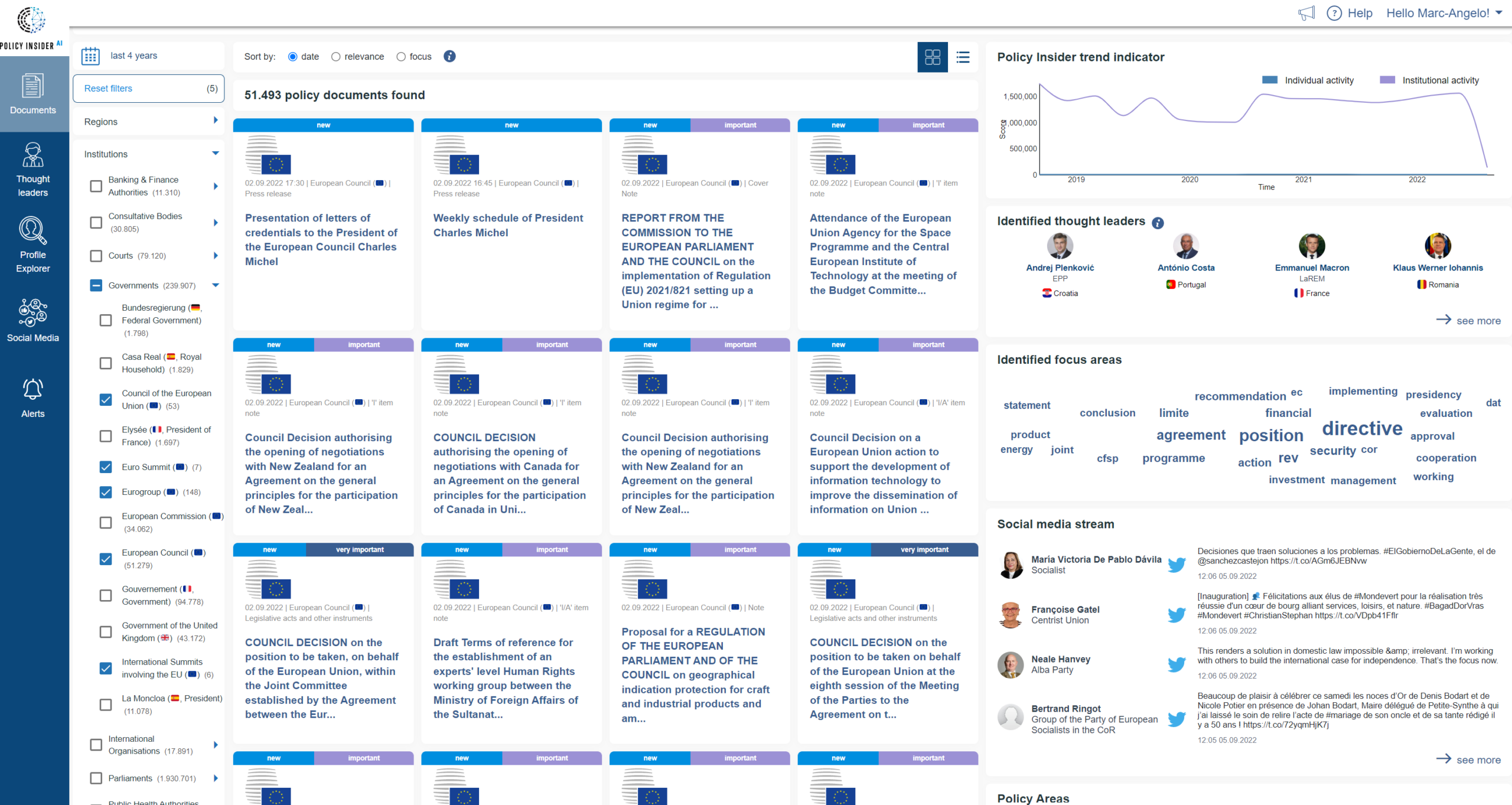 In the new release, we harmonized the appearance of documents […]
Read more

Too many, the difference between the European Council, the Council […]
Read more 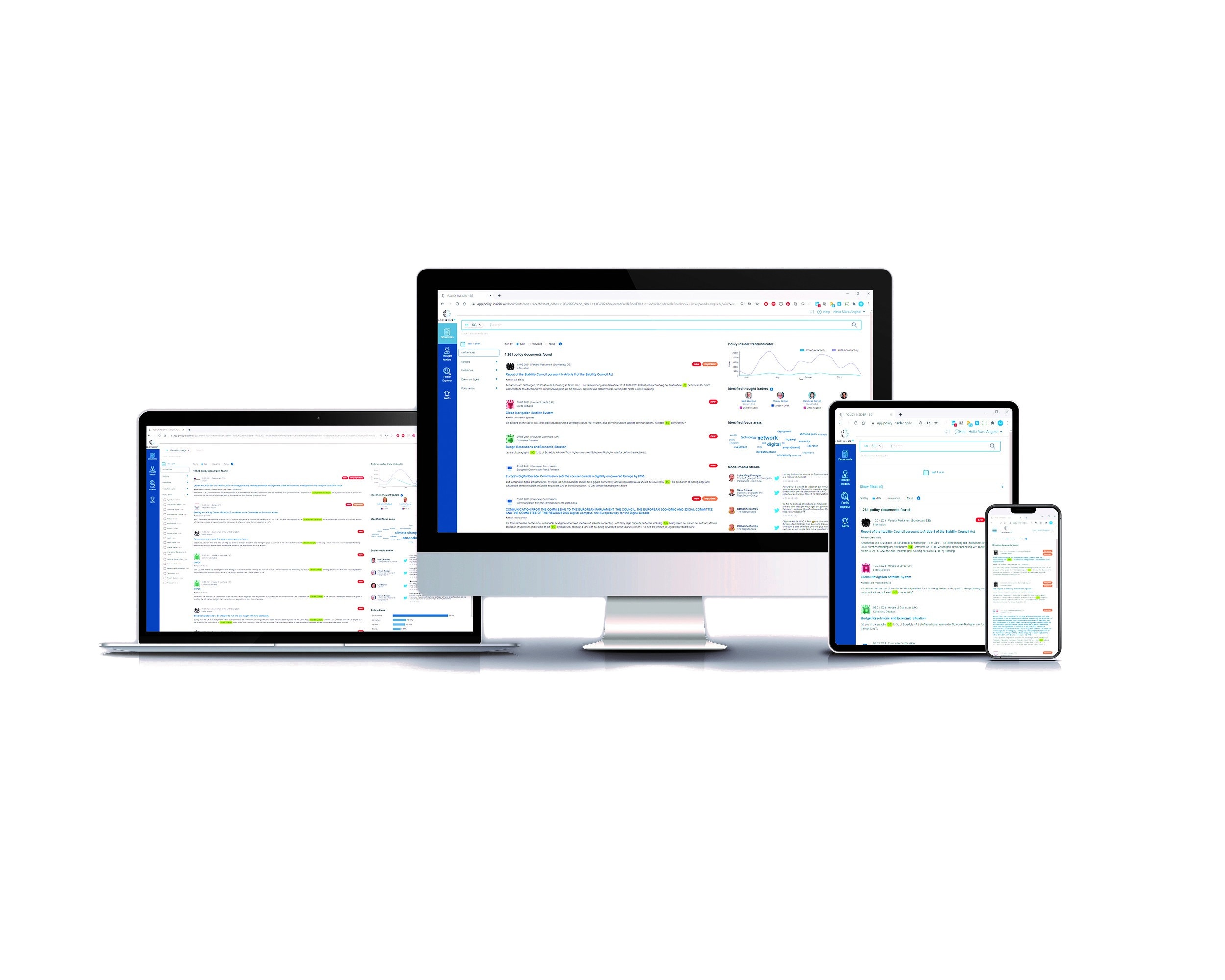 Join us! It will only take a minute

by Marc-Angelo
on Jan 17
What is the Presidency of the EU Council? The European […]
Read more

by Roman
on Dec 21
In the new release, we harmonized the appearance of documents […]
Read more

by Marc-Angelo
on Sep 6
Too many, the difference between the European Council, the Council […]
Read more