Update: Twitter Trends in the run up to the federal Bundestag elections 2021

There are just over ten days until the federal elections take place on the 26th September. Following last night’s TV debate, the big question this morning is ‘who came out on top?’ Is it Olaf Scholz, who is leading in the polls, Armin Laschet, who has crashed in recent weeks, or was it the frontrunner for the Greens, Annalena Baerbock? The trends are apparent, yet the outcome of the Bundestag elections seems to remain completely open.

The lastTV debate on ahead of the Bundestag elections on Sunday did not show any significant trend changes on Twitter. Olaf Scholz and Annalena Baerbock benefited from the large media attention. They increased their followership significantly more than in the days before. Armin Laschet however remained on a low level with just 386 new followers in the last 24 hours and a little more than 1.900 during the last week. For comparison, French president Emmanuel Macron gained roughly 15.000 new followers in the same period.

All three candidates gained significantly more followers on Twitter than in the days before following the TV debate on 12 September 2021. In relation to the more than 7.3 million viewers watching on national TV (ARD), however, the numbers seem rather negligible.

Annalena Baerbock and Olaf Scholz both gained a little over 2500 and 2100 followers respectively by the morning of 13 September, while Armin Laschet was again running slightly behind with only 940 followers gained.

Is Lindner the unexpected winner of the debate?

It is almost more interesting to look at the candidates who did not participate in the debate. Christian Lindner (FDP) jumped ahead and gained more followers (+1117) than Armin Laschet.

Christian Lindner remains one of the most popular German politicians on Twitter, actually surpassing all other lead candidates. With over 480.000 followers, he is among the top five most-followed German politicians. Currently, still somewhat surprisingly, former Commission President and SPD candidate for chancellor Martin Schulz tops this list.

What do the number of followers say about the federal elections?

Ultimately, the numbers probably only show which candidates are getting themselves talked about and which are under particular scrutiny. As you may follow policymakers to actively disagree with them on every post, it says relatively little about the popularity of a candidate. Nevertheless, follower numbers and especially their changes over time provide information about which candidates are regarded to have a real chance by the online community.

This also presupposes, of course, that the candidates also specifically design their communication on Twitter. At this point, one should not forget that Angela Merkel does not have her own Twitter account, but nevertheless follows Twitter closely.

The Policy-Insider.AI app enables you to identify all the trends that are relevant to you. You can find the most important key figures and trends at any time and free of charge here. 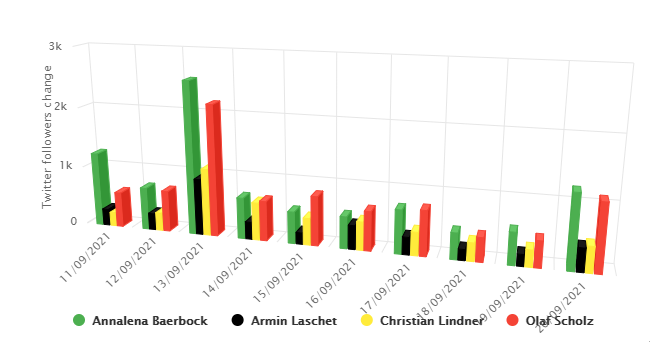