In the aftermath of the elections: What topics are MPs pushing ahead of coalition negotiations?

On 26 September 2021 Germany’s federal election took place. Although the CDU gained the second-highest number of votes, this was a historic loss for Merkel’s party. The SPD, Germany’s Social Democrats came out on top. This last week Germany has entered into coalition negotiations to form a government. If you want to read more about each party’s disposition read our blog post on our election analysis.

FDP and the Greens waste no time in coalition negotiations

Only two days after the election, the Green Party and the FDP, Germany’s so-called business party entered into talks. This is significant, as these two parties are known as the kingmakers. Since it is highly unlikely that the CDU and the SPD will work together and form a Grand Coalition, these parties will have to work with the Greens and the FDP to form a government. This means that whatever happens, the two smaller parties are guaranteed to represent government.  It is significant therefore as it implies they are aiming to form an alliance and order their demands to present to the CDU and primarily to the SPD.

If you’ve read our last blog post on the elections, you will have read that the Greens prefer a ‘traffic-light’ coalition, formed with the SPD, and the FDP prefers a ‘Jamaica’ coalition, formed with the CDU.  It is currently difficult to tell whether these parties are leaning towards one or the other together, as they have purposefully kept the topics of conversation during coalition negotiations under wraps. Nevertheless, we can still take a look at MP’s activities on twitter to gain an insight on each parties’ motivations.

One of the first things to note is the absence of coalition talks as a #hashtagged topic:

The absence of this as a #hashtagged topic confirms that each party has done this deliberately. One motivation that we can identify from this is that the parties want to keep their conversations secret from one another. If the SPD and the CDU do not know what each conversation with the kingmaker parties entails, they can neither prepare nor compete. This gives the Greens and the FDP a great deal of bargaining power.

We can look in more detail at which hashtags are trending for each party to tell where political motivations lie. For the Green party, for example, #Klimaschutz (climate protection) is number one on top hashtags. For the FDP, the top trending hashtag is still #Corona. Further down the list the hashtag #Infektionsschutzgesetz (Infection protection act) is trending, however most of these tweets stem from August or even earlier.

Both parties tweeting about #Tempolimit

As part of the Green Party’s manifesto, they want to introduce a 130 km/h speed limit on motorways which would cut CO2 emissions to tackle climate change. On Friday, however, they seemed to suggest that they may be more flexible when it comes to this topic, by stating that this issue will not be the crux of their negotiations. #Tempolimit (speed limit) has since seen an increase in activity on Twitter.

Green Party politicians seem to have reacted negatively to this statement, with Svantje Henrike Michaelsen (Greens) retweeting ‘It is so absurd that #speedlimit is still being discussed. There is no logical argument against it.’

FDP politician Oliver Luksic on the other hand tweeted ‘It’s about affordable, sustainable, and innovative mobility. This is what we will go after in all our conversations- speed limits and banning petrol and diesel are symbolic topics.’

It seems that the Green Party statement last week therefore aligns more with Luksic’s sentiments than with their own party members’. Putting the topic of speed limits on the back burner seems to indicate two things: (1) the Green Party is motivated to appeal to the FDP, which therefore (2), means the FDP currently seem to have the upper hand. The logic is to increase their change of a traffic-light coalition; the reality is they risk alienating their own party members by making concessions. 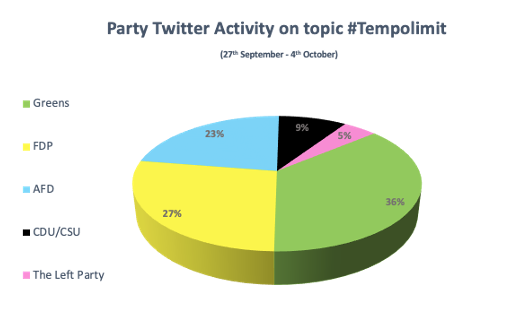